A streamkeeper training course will be held on the weekend of July 11 and 12, 2015, in the Maple Creek Watershed.  Learn about the creek, and how to gather information about watersheds.

Modules covered: 1,2,3,4 and time permitting 7 and 11 see this PAGE for more information about the individual modules of the program.
ZoAnn Morten will be the teacher, contact her at:  604-986-5059
Email her at:  zmorten@shaw.ca

Presented by the Pacific StreamKeepers Federation, PSKF
Posted by Niftyniall at 3:12 PM No comments:

Apparently Metro Vancouver is digging up Davies Avenue, near its junction with Westwood Street,(Pipe line Road, to some of us )  and has the traffic in one direction only.
All in aid of a water flow meter chamber.

Cloudy water safe: PoCo   [ But Fox Creek, is being made unsafe, to do this ]
Could not find a description at Metro Vancouver's typical cryptic, secretive website


Apparently this construction is from February 3 and March 7, 2014.

As per usual they are making a mess of the area, a sane person would think that the water department, would be more careful around water courses than other government departments, well you would be wrong.
"Familiarity breeds contempt" they say. 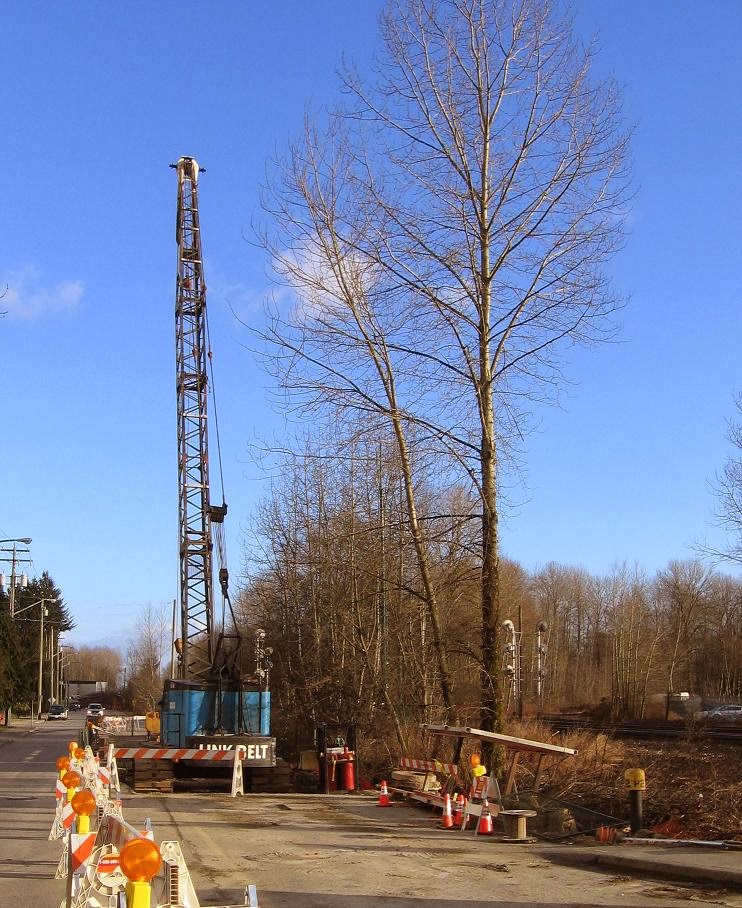 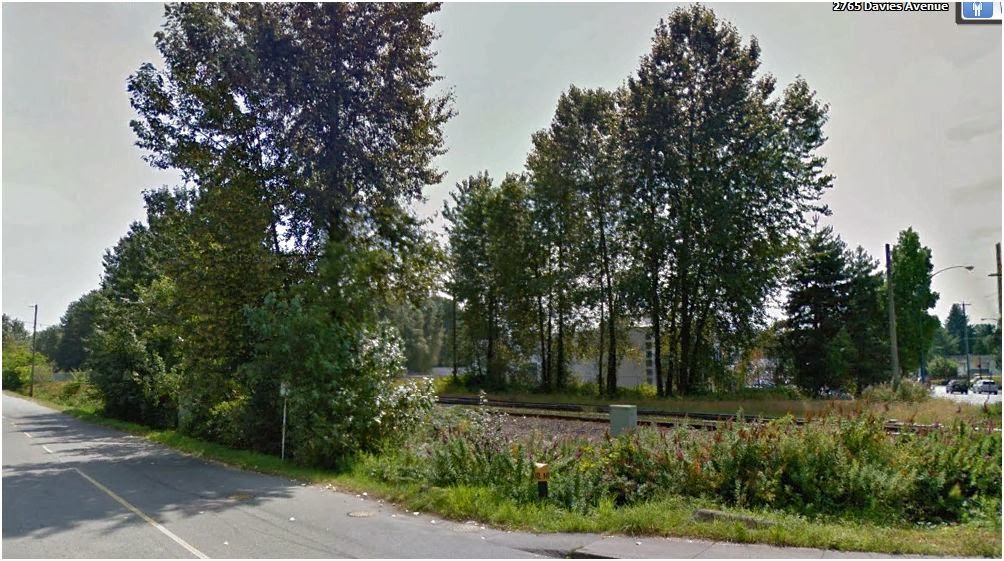 Google Street View, of essentially the same area; but in better days. 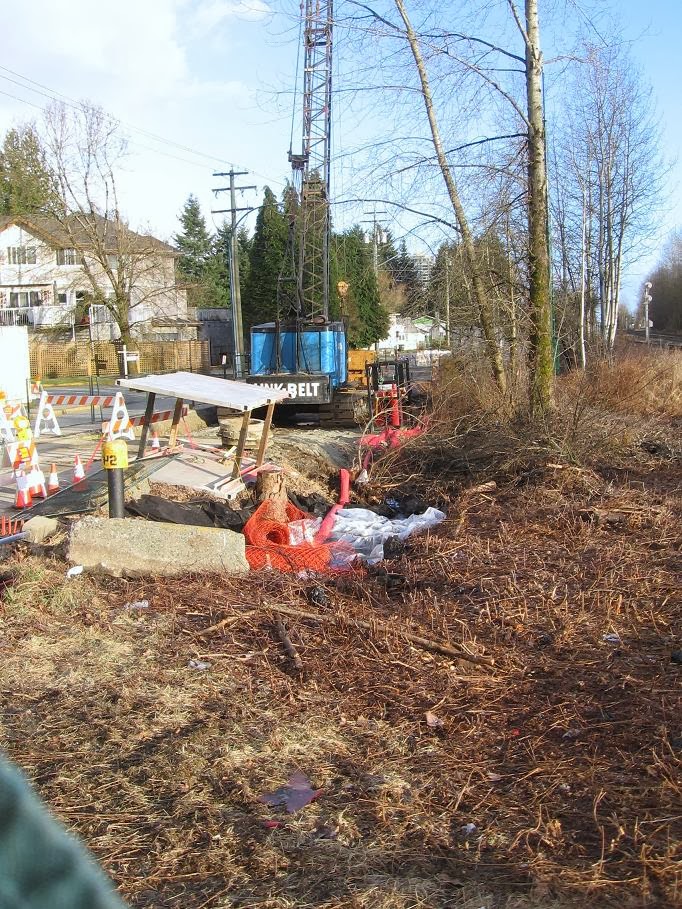 Below the concrete barrier, is the westernmost tributary of Fox Creek. I should note that it was probably an overzealous crew of C.P.R. contractors, that cleared away the trees, and shrubs here;
even though this really is a creek protection area, in theory 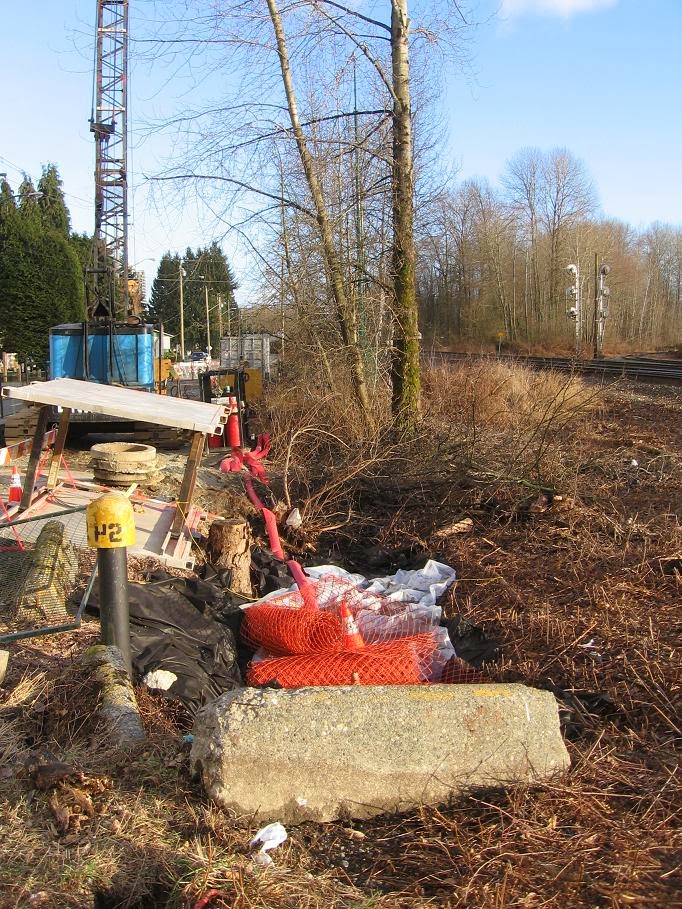 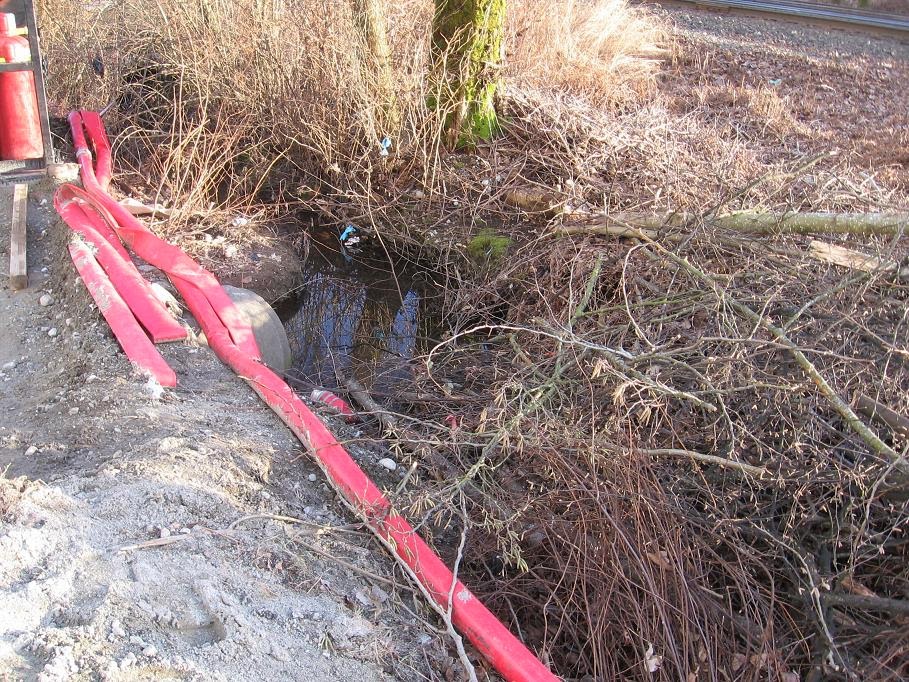 There is a creek in there somewhere 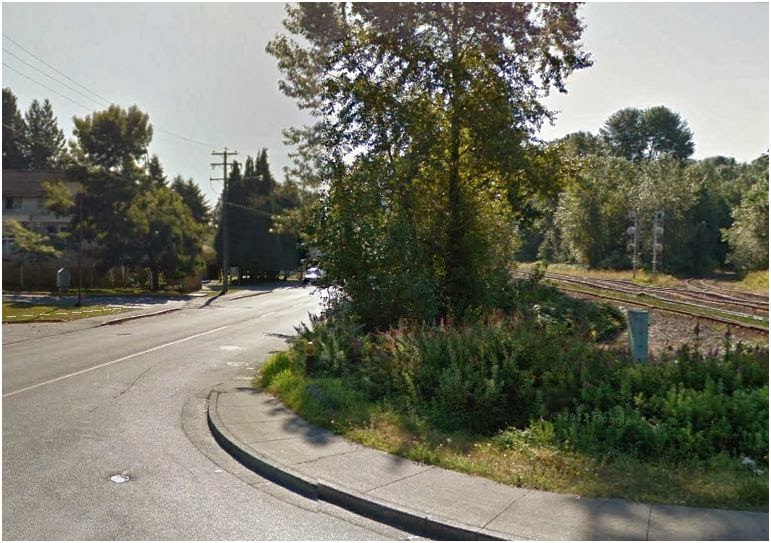 In better days, and weather it looks like this photo from Google street view 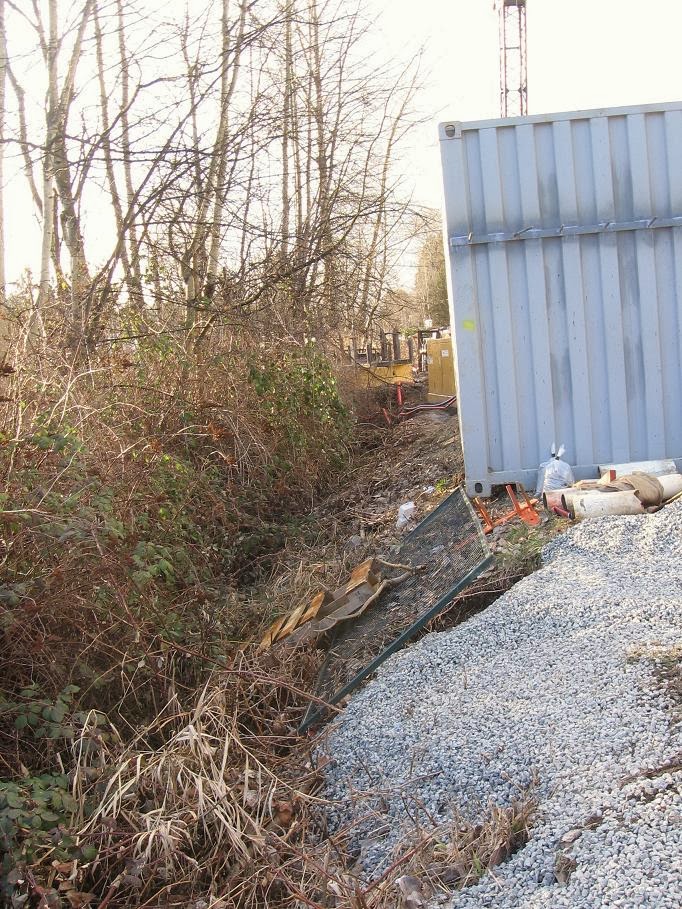 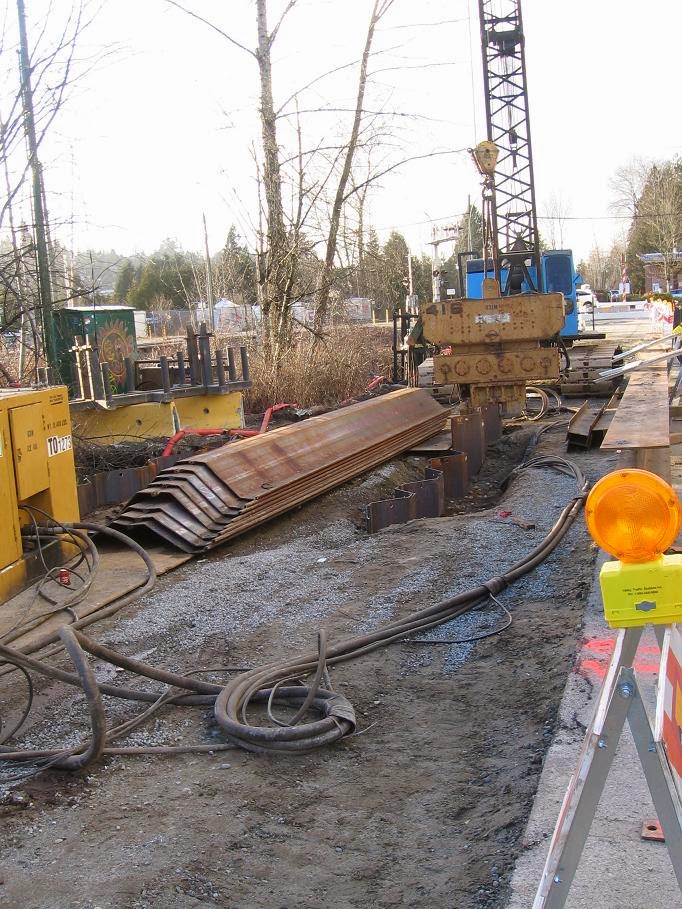 Note the dark green cabinet on the left, in this and the below image 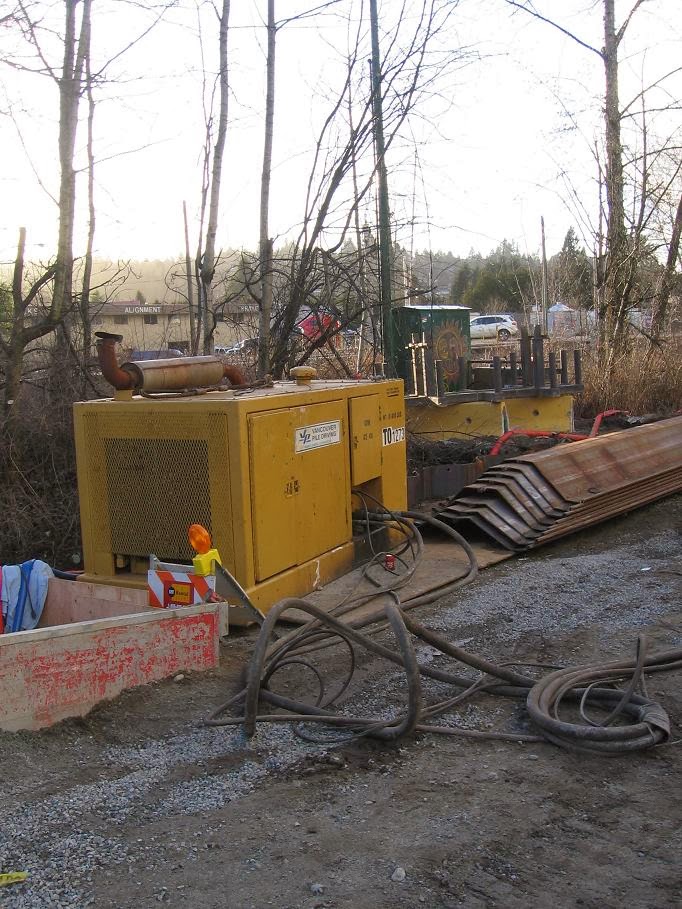 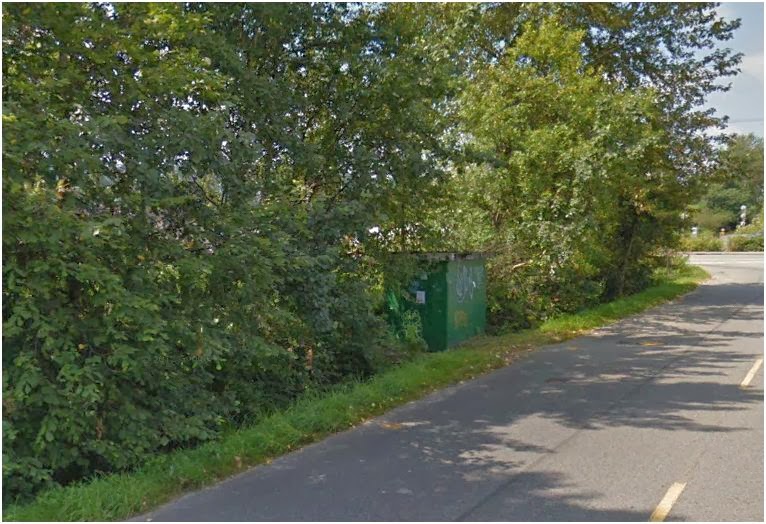 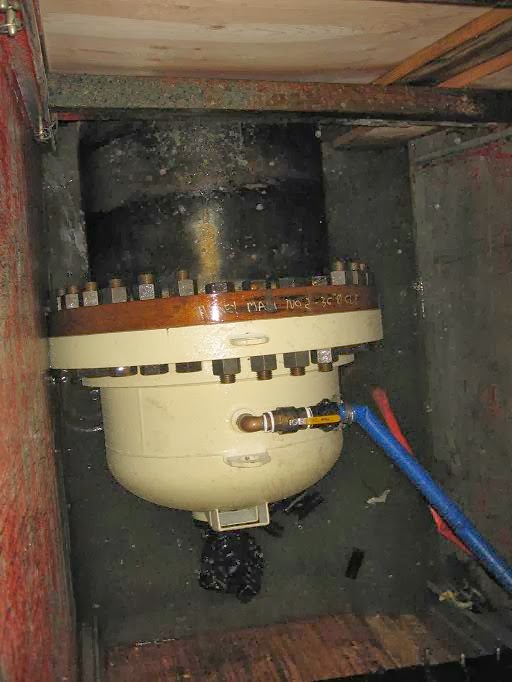 Buried in the ground; apparently the water will flow in a different direction in portions of this area, so the water may be fairly turbid for a while.

Thanks Metro, for  reopening  the festering wounds that our creeks have become.
A simple  15 Metres of silt fence, and a bale or two of straw would have gone a long way to protect the stream along here.

UPDATE: March 12, 2014
Shot a quick pic on my way through the area today, still a mess there, no respect for our watercourses. 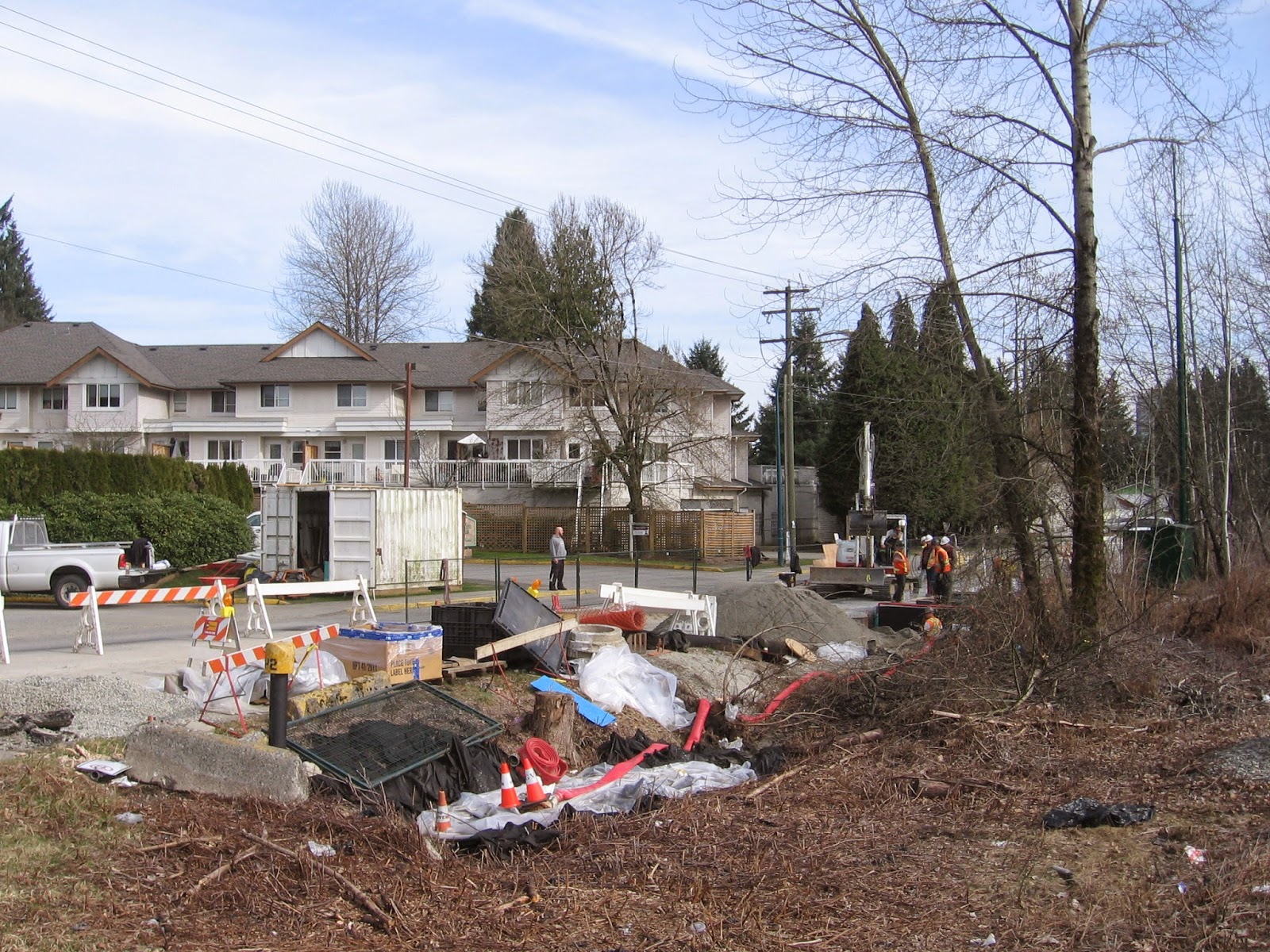 Visit our website , that is constantly under construction.
A few pictures of the Maple Creek watershed at Panoramio

To report environmental incidences, in Coquitlam during and/or after regular work hours, please contact the
24 hour Customer Service line
604-927-3500

We meet at 7pm the second Wednesday of the month in the Common Room, at Jane Gardens 2620 Jane St, Port Coquitlam.
See HERE for more information